Why Are Dinotrux Toys so Expensive?

Top10Toys.org is reader supported. When you buy through links on our site, we may earn a commission. Learn more.

Dinotrux toys are expensive because they are not made anymore. Everything available online is end-of-line clearance stock. As a result, you will see prices in excess of $50 right now due to this. They’ve gained collector’s status due to their price and lack of availability.

The only people with stock available right now are toy retailers who have access to end-of-line toy suppliers. Additionally, Mattel’s series of Dinotrux toys were released in 2015. They released their stock to Toys R Us the same year as the show’s debut.

In theory, Mattel would have signed a deal that would give them enough time to create large amounts of stock. Meanwhile, the show made more episodes up until 2018 which included a follow-up series called Dinotrux Supercharged. Mattel could have signed an extension to create more toys as the show was still trending.

Mattel signed a pre-agreement to make the toys in time for the release. Clever, huh?. Moreover, the franchise was exclusive to Mattel because they were the only ones with the licensing rights. They must have paid a high figure to secure that exclusivity. 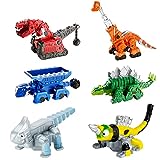 Mattel was the only brand that bought the licensing rights from Dreamworks to create toys. As of now, nobody currently makes Dinotrux toys.

Dinotrux stopped creating new episodes in 2018, which is why Mattel stopped making new lines. However, the show is still popular and still airs regularly on television. In addition, the ratings for the show are pretty decent, with IMDB scoring a solid 6.8/10.

With both series scoring decently on IMDB and with the popularity of the franchise, perhaps there will be a new season in the future, with a new range of toys to follow that. It would make sense because the show is still very popular and people are unhappy about the current price of the toys.

This is similar in contrast to what happened with Octonauts toys. Fisher-Price was the only one who could make the toys, now their license expired, they can no longer make new toys. As a result, the ones remaining on the market are very expensive.

We hope this explains why Dinotrux toys are so expensive. We’re stuck in limbo until they either agree on a partnership to make more stock or until Dreamworks makes a new season.

How Much are Dinotrux Toys Now?

Surprisingly, the Dinotrux Bundles are one of the cheapest Dinotrux toys, they cost $30. Within these bundles, you get around 6 of the characters from the series. This one is more reasonably priced because there are many sellers who have these bundles available.

As a result, if you want the best value, then we strongly recommend purchasing the bundles. They’re the cheapest and you also get 6 of the Dinotrux figures. These figures include Ace, Garby, Ty Rux, Skya, Ton-Ton, and Revvit.

The individual characters range from $35 onwards. For example, Reptool Revvit is $40 by Mattel. However, some smaller ones such as Reptool Click Clack Vehicle are as high as $50 because there are few sellers with this stock.

This is expensive for any toy, but normally you’d expect RC toys to be a cut above regular figure playsets. Having said that, it’s still at least 30% higher than the price would be without the availability issue.

The Blizzard Battlers are the most overpriced and expensive Dinotrux toy by Mattel. Furthermore, at the time of writing, there has been only 1 seller available for the last few months and the price is $150. What’s more bizarre is people are actually paying these prices!

This is simply a motorized pull-back playset with articulated features on the toys. People have actually been paying this hugely inflated price for this particular playset and people are outraged.

To no surprise, the reviews of these toys are now suffering because of the high price, they’re paying due to the lack of availability and not for anything special other than an ordinary toy.

Are Dinotrux Toys Worth It?

No, it is not worth paying the extortionate prices right now because when you think of the bigger picture, you could get a lot of other high-quality toys for the same price you pay for a Dinotrux toy.

For a fraction of the price, you could buy a tech deck instead. If your little one likes skateboarding, they’ll be occupied for hours.

However, some of the toys are somewhat reasonably priced and give good value. For example, the bundle is $30, and whilst that is still expensive for a toy, if your little one is a huge Dinotrux fan then it will be worth forking out.

Some parents have felt left with no choice but to purchase them, especially those that are a bit more lenient to their children and like to splash the cash when their kids ask twice a day.

Many of the reviews have mentioned how much the buyers wanted to return them for a refund, but their little one had already opened and started playing. So in one sense, the kids will get a lot of joy from them.

I’m the editor here at Top10toys.org. I’ve worked in the toy industry for just over 10 years, so I know the ins and outs of all things toys. I thought I would share everything with you on my blog. I’m also a big kid at heart and I’m not ashamed to say that I still get the lego out every once in a while.